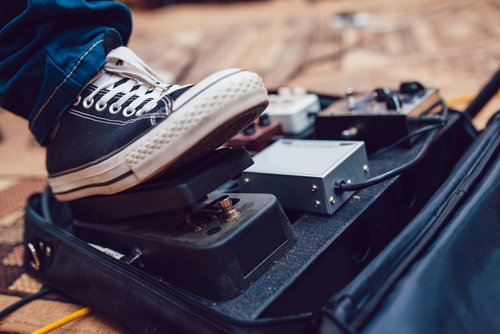 Although quite fun and engaging, playing an electric guitar is not exactly simple. Aside from all the techniques and music theory, you also need to find the best possible effects for your needs.

You just can’t go without them! And to make things worse, you need to learn how to work with them and make the best out of your guitars and amps. Even the slightest nuances can differentiate between a good and not so good tone. Of course, one of the most important (if not THE most important) effects is distortion. It’s created by boosting the signal and then deliberately “clipping” it and creating that recognizable rough sound.

Of course, with the mention of guitar distortion pedals, there’s just no way to avoid the legendary DS-1 by Boss, labeled just as “Distortion.” Starting its production way back in the mid-1970s, the pedal’s circuitry remains almost unchanged. There are some slight nuances if you were to compare the ones from the old days and those we have now. However, the pedal’s unique clipping remains an industry-standard even to this day. What’s more, many famous guitar players still have it in their rig. It finds use both for rhythm and solo sections and has just a slight addition of fuzzy overtones. It’s simple and it still works! You can’t go wrong with it.

Another old classic is the legendary Pro Co Rat. Of course, the pedal saw many evolutions over the years, but the main overall idea remains the same –  a razor-sharp distorted tone with a unique filtering control. Although it has only three knobs, you’re still able to create a lot of different tones with it. And if you combine it with a tube amplifier, there will be all sorts of different tones thanks to any tube amp’s natural ability to add some dynamic response. It’s a classic 1980s-style pedal that still finds use even in modern music.

Talking about old legendary stuff that’s still in production, Ibanez’s Tube Screamer remains, to this day, one of the most respected overdrives of all time. Of course, overdrive is a type of distortion with softer clipping, resembling the tone of tube amplifiers. There have been many different versions of the Tube Screamer, but TS9 is still almost unchanged like the version from the early 1980s. At the same time, it’s still pretty affordable, sitting right on the edge for our article’s price limit. Combine it with any tube amp, and you’ll get a surprisingly rich distorted tone.

TC Electronic has an abundance of great pedals in its collection. The one that stands out for our list here is their Dark Matter distortion. It’s surprisingly cheap for a pedal of this quality. There are four control knobs – level, gain, and two more for a 2-band EQ. The pedal also has an additional voicing switch that changes the pedal’s processing of the lower end of the spectrum. It’s really easy to use and it seems that it takes almost no effort to create some great tones with it. Although intended for some heavier stuff, the pedal is capable of making tight bottom-end-heavy tones for any style that you need.

This is yet another classic from the old days that’s still in production. Now owned by Dunlop, the MXR brand has a lot of interesting and useful pedals to offer. The one that we’d single out is the very simple MXR M104, or Distortion Plus (also labeled as “Distortion+”). And when we say simple, we do mean simple. It has only two knobs and a footswitch. You have volume and drive level. That’s it! What’s more, it has a very compact casing, which makes it a perfect choice for those crowded pedalboards. But despite its simplicity, this is one very potent little pedal. After all, there’s a good reason why this pedal has been around almost unchanged since the 1970s.

There might be some weird looks aimed at this guide for including a Behringer pedal here. But to be perfectly honest, their pedals can perform as good as the more expensive models that they’re replicating. For instance, Ultra Metal UM300 is somewhat of a clone of Boss’ MT-2 Metal Zone. And even though it’s significantly cheaper, this pedal manages to do this job very well. At the same time, it’s a fairly versatile one. On the downside, the plastic casing doesn’t make it the most durable or reliable piece of gear. But it’s so cheap that you can easily buy two and have one as a spare pedal. It’s not a popular choice, but it’s still more than a decent pedal for this price level.

While Tube Screamer still retains its legendary status, it got a competitor when TC Electronic’s MojoMojo. The most surprising thing is its price, mostly because this overdrive pedal outperforms many expensive “boutique” products. Just like with the company’s Dark Matter that we mentioned, we have the same basic controls. The voicing switch does a bit of a different tweaking, and the pedal has softer clipping. But just put this one in front of a tube amp, and you’ll be able to create some of the best dynamically responsive tones.