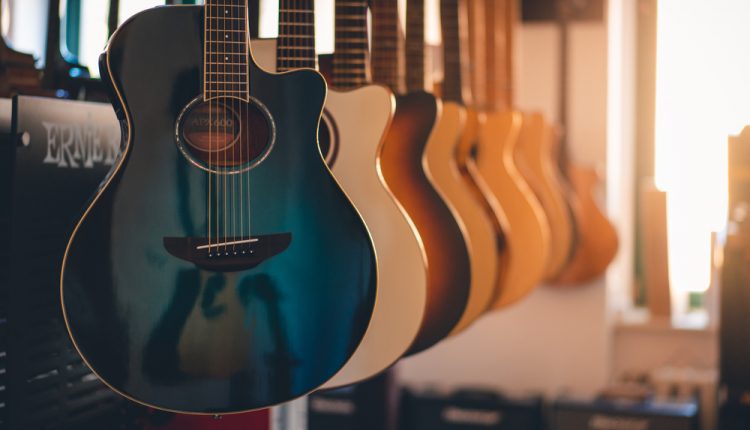 It’s been quite a long time since Torakusu Yamaha opened up his musical instrument manufacturing company in Japan. And over 130 years later, they’re not only still standing strong but have turned into a multinational corporation that makes plenty of different instruments as well as other products, including mixers, microphones, electronics, and even motorcycles. However, what we’re most interested in here are their wonderful acoustic guitars.

No matter the genre, you’ll see beginners, intermediate players, advanced players, and even professionals holding Yamaha guitars in their hands. What’s more, you’ll also often see the same exact model being played in completely different musical styles. This only proves the quality and diversity of Yamaha’s products and their value on the market. If you’re one of those musicians that’s interested in getting one of their acoustic guitars, we have to be honest – you just can’t go wrong here. With this in mind, we’ve decided to help you out by bringing out the best Yamaha acoustic guitars that you can find today. Here’s what we’ve come up with.

The company’s L-Series of acoustic guitars are one of the most respected in their arsenal. Going a bit higher on the price level, we have many interesting examples here that come in handy for different styles and levels of playing. The one that we’re rather fond of is the LL16 model that comes with classic Jumbo body shape. Combined with a wonderful solid spruce top and solid rosewood sides and back, you get a full resonant tone that gravitates towards the high ends. This makes it a wonderful choice for lead players, as well as those who play folk and folk-rock music and want to have some treble in there. This is all accompanied by a mahogany and rosewood neck with an ebony fretboard fitted onto it, featuring 20 frets.

The FS800 is somewhat of a simpler model that goes more into the lower-priced category. But despite its cost, this guitar brings some serious tones and performance qualities that you don’t see within this range. The classic concert body is made out of a spruce top and laminated wood back and sides. Although this is a cheaper solution, the resulting tone doesn’t suffer at all. This guitar sounds pretty bright, even despite its relatively smaller body size. This is all rounded up with a nice nato wood neck and a walnut fretboard that provides great comfort in playability. The inside of the guitar is fitted with scalloped X-bracing that ensures a good tone and a very reliable build quality.

Yamaha’s FG800 model is pretty similar to the FS800 that we detailed above. However, some things make these two instruments different. First off, we have the same solid spruce wood used as the top material here. The back and sides, however, are made from a combination of nato and Okoume wood. This does not only impact the tone but it also makes FG800 look very stylish. And compared to the FS800 model, the body features the classic aesthetically-pleasing dreadnaught shape. At the same time, we also have scalloped bracing on the inside. As for the neck, it’s made of nato wood and it’s been tapered to provide a very comfortable playing experience.

And then we have something like their FG840 model that also comes with its own unique traits compared to other guitars from the FG series that we mentioned here. Here we have the traditional Western body shape. However, the top material is once again solid spruce. It’s all followed by rosewood back and sides, as well as nato wood neck with rosewood fretboard on top of it. What’s pretty useful with the neck is that it features a matte finish, which is what some guitar players prefer. Overall, this guitar brings a comfortable performance for players of any skill level and it comes with a very balanced and somewhat neutral tone.

Looking further into their arsenal, we couldn’t help but mention one of the cheaper models that comes in quite handy for all the beginner and intermediate players. The model in question is F325D, which is a dreadnaught-shaped guitar, perfect for folk, rock, and blues music. The difference here is that we have a laminated spruce top instead of a solid one, as well as meranti back and sides. But despite this use of relatively cheaper materials, the guitar sounds pretty awesome. It’s all followed with a nato neck that has a rosewood fingerboard on it. It’s just a simple classic dreadnaught guitar with a very versatile implementation in different genres.

Now, Yamaha’s APX600 is a bit different. Gravitating more towards the professional-grade stuff, this particular model features a thinner body with a very stylish and ergonomic cutaway. It doesn’t take long to realize that this guitar is intended for lead players. This is also noticed with its tone that’s noticeably brighter compared to some other instruments that we mentioned here. We also have a System 65A Preamp that’s accompanied by a piezo pickup, as well as a built-in tuner. Being a real mean soloing machine, this guitar is also aesthetically pleasing, making it one of the prettiest acoustics that came out of Yamaha’s factory.