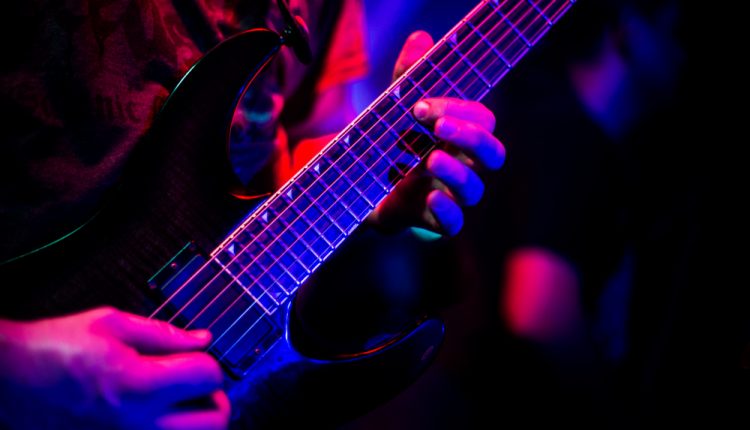 Rock ‘n’ roll gear is strikingly different from instruments and accessories you’d use for playing, say pop or R&B music. You’ll need heavier guitars, louder amps, and a bit different strings; while most people already have the former, we’re here to make a couple of suggestions regarding the latter:

Our first pick is a 3-pack of Ernie Ball’s Power Slinky custom-gauge strings. They’re made of wound nickel that can withstand months of touring and that will complement your sound with extra roughness on the lower end and a bonus in crispness as far as the top end goes.

Note that these strings are super-thick; they’re very playable, but they’re not exactly perfect for solo guitar players unless your tuning is super low (like for instance C or Flat B).

Rockers and metalheads who are looking for quality strings should take a look at Dunlop’s DHCN1150 Heavy-Core strings. These beauties offer rapid attack and ultimate playability topped with superbly defined lows; however, you’ll notice that the ‘thinner’ strings are not exactly ‘thin’, so getting accustomed to these might take you a while.

On a bit brighter note, Dunlop’s DHCN1150 set is exceptionally affordable, and since they are made of ultra-robust material you can rest assured that you’ll be able to use them for at least a couple of months.

The 2215 string set is perfect if you are playing in a one-guitar band; the heavy bottom strings will allow you to nail down super heavy riffs while the ‘skinny’ top strings will provide you with the ability to pull off slick solos on the same guitar. They sound and feel amazing, but they’re also a bit more expensive in comparison to standard heavy-gauge strings.

Dunlop’s DEN1046 string set is strikingly different from DHCN1150; these strings are brighter, warmer, and offer a more pronounced presence and mids. In terms of playability, these strings are almost unmatched, but it’s their strong, reliable tone that sets them apart from similarly priced models.

They are absolutely ideal for rock, hard rock, glam, and certain sub-genres of metal, but they are also versatile enough to accommodate the needs of those who are into a bit ‘mellower’ music as well.

Even though these strings are a bit more expensive than most people would bargain for, they offer unprecedented playability without compromising their sonic performance. They’re made of exceptionally durable round-wound nickel with a hexagonal core and are super-light.

On top of that, their oversized core affords you with a more balanced sustain and generally a bigger, warmer, full-bodied tone. The only thing that you might not like so much about the BCCL Rockers is that they are custom-gauge strings, which means that you’ll need a couple of days to get accustomed to how they feel.