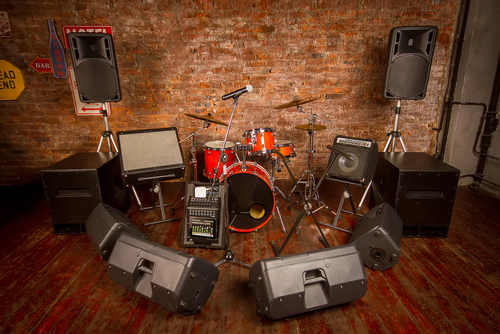 No matter the style of music that you’re into, it’s never that easy to choose the right amp for your needs. Sure, the process of finding one can be fun and interesting, but it often takes a lot of your time, and many need to find a compromise and settle for something that’s not exactly the perfect solution for their needs.

This issue usually comes down to availability and price. However, things might get even more complicated if one’s playing both guitar and bass. This would require you to have at least one amplifier for the guitar and one for the bass. You can’t quite use a guitar amp for bass without potentially ruining it, and using a bass amp for guitar just gives a dull tone.

However, what some may not know is that there are “universal” amplifiers that give you a good tone both with electric basses and electric guitars. They’re usually not that common, but you can still find them here and there. With all this said, we’ll be looking into the best guitar and bass amplifiers that you can dig up on the market today.

Of course, it wasn’t exactly easy to find them. Even with so many technological advantages today, universal amplifiers that are marketed for both guitars and amps are not that easy to find. This is not because they’re difficult to make, but mostly because they’re really specific and there’s not exactly a high demand for them. But either way, we managed to dig something up and find a few great examples.

Look, we all love to have super powerful amplifiers. There’s rarely a feeling similar to blasting a distorted power chord through a 150-watt guitar amp. However, what if you had 10 times that power? Oh, you think that’s crazy? Well, the guys over at Line 6 have actually made a 1500-watt amplifier, simply called Firehawk 1500.

This bulky and large cube-shaped amp is capable of delivering great tones for both electric guitars and electric basses. And what’s most exciting is that it can also work for acoustic instruments with piezo pickups, both basses or guitars, as well as microphones. In some way, it’s like a compact PA system that’s mostly guitar-oriented. It’s a full-range system with 6 individual speakers and has a USB connection, MIDI compatibility, as well as an option to control it through an Android or iOS app. Pair it with a small mixing board and a few other needed devices, and you’ve got yourself a PA system for an entire band.

Yes, it’s a bit difficult to carry around with you. However, it’s an ultimate universal amp that also comes with digital amp models for any purpose. If you need something universal for live shows, this is what you’ll want to get. But it’s important to dial in some amp modeling presets. If you’re using it in its “flat” mode, there’s a chance your bass or guitar will just sound dull. After all, it’s not quite possible to make a perfect amp for completely different purposes. Nonetheless, it’s a great choice.

Now going over to something smaller, we’re looking into Yamaha and their compact little THR10II. Of course, this is not a serious amp for live settings, although it has 20 watts, which is just about enough for home practice and maybe some smaller quieter gigs or busking.

Interestingly enough, this cute little amp is just slightly larger than an average lunch box. It has two speakers in it, both of which are 3 inches in diameter. It’s a bit weird to see such a configuration for a guitar amp, so it kind of looks like a small tube-driven amp head. But despite its size, it’s one very potent tool. It’s not only packed with useful tone-shaping controls and great effects, but there are also digital models for bass guitars, acoustic guitars, as well as the “flat” mode that makes it a good option for keyboards or even microphones.

The addition of the USB connection is also another great feature. This way, you can use the amp as a rudimentary but useful audio interface and record multi-track projects in your DAW.

As its name suggests, Roland’s Street Cube EX is aimed at street performers. However, it’s pretty good even for practices and regular live gigs. What’s more, the amp has two main sections, one that can be used for regular guitars, and another one that comes in handy for other instruments, like basses, keyboards, and even acoustic basses and guitars with piezo pickups. What’s more, each of these sections come with a universal XLR and 1/4-inch combo input, and you can use them for microphones and instruments. These are two separate channels, but the amp also comes with the third section that has a stereo line-in for backing tracks or even two additional instruments.

The most exciting part is that it can be powered with AA batteries. On top of all this, Street Cube EX has the maximum output power of 50 watts. Of course, there’s also an attenuator that can help you save power and perform for hours without replacing batteries that often.

It’s not a professional piece, but it still manages to work pretty well for both guitars and basses. Furthermore, you can also plug in a keyboard in there, as well as your phone, tablet, or laptop to play backing tracks.

Lastly, we would also like to mention Peavey and their Vypir VIP 3 amp. Just like other products from this series, it’s a universal amplifier that can work with electric and acoustic guitars, as well as with electric and acoustic basses. It has an onboard digital amp modeling processor that helps you shape your tones for any settings. The total output power is 100 watts, which makes it a great option for live gigs.

The modeling section works surprisingly well. There are some very realistic tones that you can dial in, both for guitars and basses. It also comes with a power attenuator, as well as a USB connection. You can’t go wrong with this one.