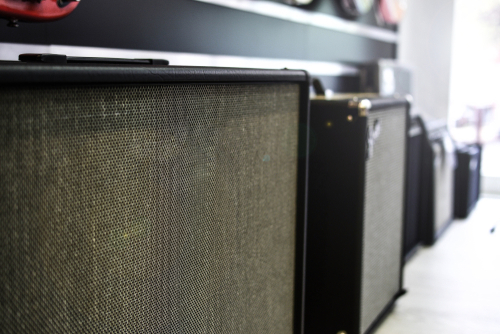 When one gets into the world of electric guitar, they immediately start focusing only on the instrument itself. But while guitar and pickups do make an impact on your tone, you should never forget that the amplifiers are where the party happens. And guitar amps are not exactly simple devices.

They don’t just take the signal from your guitar to amplify it, but also do all the main tone-shaping. Every amplifier consists of a preamp and power amp section, but the main part of the tone is molded in the preamp. They can come in the “combo” form with an integrated speaker, or as a “stack” where you have a separate amp head with preamp and power amp sections, and an additional passive cabinet. But there’s one big problem with amplifiers – if you want a good tone, you need to pay a lot.

But you don’t need to worry since these days you can find some pretty good amps for a more reasonable price. Of course, digging these amps up from an immense pile of brands and models that we have today is not that easy. But that’s exactly the reason why we decided to do this for you and bring you a list of the best guitar amps under $500. Of course, this wasn’t exactly the easiest task and it took some research. But we still managed to find something for everyone’s tastes and needs.

A day can’t go by in the world of an electric guitar without a mention of Boss and their amazing products. Not that long ago, everyone thought that the solid-state amp game cannot be taken to a new level. Well, Boss proved everybody wrong when they released their amazing but affordable line of Katana amplifiers. For this list, we have Boss Katana 100, the improved MKII version.

It’s a fairly straightforward amp that’s pretty easy to use. However, it also comes with a few different amp type simulations, some very useful effects, and even a power attenuator. You can even make presets of your own and switch between them when needed.

Yamaha has built its reputation for making some of the best instruments and music equipment in history. Anything that comes to mind, they have it. But if we’re talking about guitar amplifiers, their THR series got some serious attention in the recent years. The improved THR10II is a 20-watt amp with a few different amp models

Roland’s line of Jazz Chorus amps is widely considered to be the best series of solid-state amps of all time. While it’s debatable what’s the best, many of the famous guitar players used them for studio albums. For this list, we have a smaller version, JC-22 that has 30 watts of output power. It comes with a mind-blowingly crystal clear clean tone and has an amazing onboard chorus effect. This particular version doesn’t have a drive on it, but when combined with some classic distortion pedals, it can do real wonders to your guitar tone. What’s more, there’s even a bright switch that adds those sparkling high ends and is extremely effective for guitars that have single-coil pickups. You can’t go wrong with this one, no matter the genre you’re playing.

For many years now, Line 6 has been making some of the best guitar amps in the affordable price range. The continuation of their Spider series, the Spider V, is especially interesting. The 120-watt version can handle even larger gigs. And the best part is that it comes with some great digital replicas of great amps. It’s quite amazing what such a cheap amp can do. What’s interesting is that it comes with a full-range speaker system that even includes “tweeters” for those expressive high-ends. It’s a bit unconventional for a guitar-oriented amplifier, but it does a great job.

Tube amplifiers are considered to be high-end equipment, mostly for their warm and “organic” tone that they produce. While most of them are fairly expensive, we have Roland’s Blues Cube Hot that has 30 watts of power and it’s fully tube-driven. Of course, there are larger versions of this model, but 30 watts of output power is more than enough for a tube amp, even for a live gig.

This amp bears one 12-inch speaker and it’s mostly vintage-oriented. As its name suggests, you can get any kind of blues or blues-rock tones with it. But combine it with the right set of pedals, and you’ve got yourself one powerful hard rock amp. It comes with all the bare essentials, and there’s even a power attenuator that lets you use the amp’s full potential even at lower volumes.

While we’re at tube-driven amplifiers, it is mindblowing that you can find some rather cheap models these days. Monoprice is a generic-brand electronics retailer, but they actually have some surprisingly great tube amps. A good example is their 611815. Although the name is pretty much a random string of numbers, don’t think that this amp doesn’t have its punch. It comes with two EL84 tubes, 15 watts of output power, and even an onboard spring reverb.

But above all, we’re mostly surprised at what this amp can do for this price. It even outperforms some of those overly expensive amplifiers that are often labeled as “boutique.” Push the gain knob up high and you’ll get that natural “raspy” overdriven tone that works well for blues music. Add an overdrive pedal to it, and you’ve got yourself a real metal amp. Yes, it seems impossible that all this is available for around $300, but it’s true. This is real proof that tube amps no longer need to be so expensive.