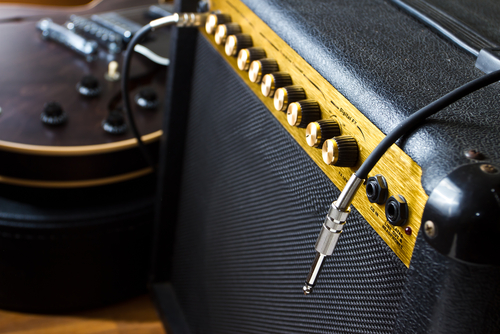 The real evolution in music came with the invention of the electric guitar. However, the instrument was a bit complicated. And it still is. To get any sound out of it, you need a specialized amplifier. In the earliest days, we had tube amplifiers. And even to this day, tube-driven guitar amps still have a reputation of being the best ones. Despite the development of solid-state amps and digital modeling technology, tube amps still have the best reputation.

And it’s no wonder. After all, no other amps out there can get this tone quality, warmth, and dynamic response. However, there’s a catch – it comes with a high price. Also, tube amps are expensive to maintain since you have to change the tubes every once in a while. The only affordable alternative here is going with solid-state amps.

But although solid-state amps can’t really have some of the qualities that tube amps posses, some get close. And it’s the perfect solution for any musician looking for a good tone on a budget. This is exactly why we decided to step in and bring you the list of some of the best solid-state amps that have near-tube quality. Of course, it wasn’t exactly easy to dig them up, but we found something for everyone’s liking.

In the sea of solid-state amps on the market today, Peavey’s Vypyr VIP series stands out as one of the best. Even though they’re not expensive, you can still get some really good tones out of them. In particular, we’re interested in Vypyr VIP 2 amp, which comes with a total of 40 watts of power. The amp is equipped with one 12-inch speaker which was voiced in such a way to bring out the best of this amp’s circuitry.

Vypyr VIP 2 comes with an abundance of effects, amp models, as well as very detailed parameter controls. It might take some time for a less experienced guitar player to get used to it, but it offers 36 guitar amplifier models, some of which will help you achieve those tube-like saturated tones. In addition to all this, the amp comes with a USB connection, making it easier for you to record music using your computer.

Back in the old days, Roland developed their Jazz Chorus series of amplifiers. Interestingly enough, these amps are still in production, almost unchanged compared to the original models back from the mid-1970s. They’ve built their reputation for being some of the best amps on the market, which is quite surprising for solid-state devices. Also, these amps carry wonderful-sounding chorus and vibrato effects and can also work in stereo.

This is exactly what you can find with JC-40, which is a 40-watt version of this great amp. Its crystal clear tone was a favorite even of some famous rock guitar players over the years. Compared to other solid-state amps, it’s noticeably more expensive. However, you won’t ever find a better solid-state amp than any of the products from the Jazz Chorus series. And despite its name suggesting that it’s a jazz-focused amp, you can use it for pretty much any genre. You just can’t go wrong with JC-40.

Orange amps are kind of specific. They’re all great but are for those who are into old school-inspired tones, like the stuff that you can hear in the late 1960s and the early 1970s rock and hard rock music. If you’re a fan of fuzzy distorted tones and need something that will sound great for the money, we’d recommend Orange’s Crush Pro CR60C.

Like most of their amps, this one is pretty straightforward. It bears 60 watts of power and produces a pretty solid tone through its 12-inch speaker. We have some simple controls, including clean and distorted modes. The amp also comes with three different reverb effect types. It isn’t as versatile as some other stuff that we mentioned, but it sounds amazing for those who like vintage rock and metal stuff.

We can’t help but add another Roland amp on this list. And it’s no wonder since Roland’s Blues Cube series is respected even among the tube amp lovers, especially the Stage model. This one has an output power of 60 watts and one 12-inch speaker. We also have an attenuator switch, soaking up the power down to 45, 15, or even 0.5 watts. We have some simple yet very versatile controls, including a 3-band EQ, clean and crunch modes, additional boosts, as well as controls that add a new twist to the EQ curve.

However, the most important feature of this amp is its so-called “Tube Logic,” developed by Roland. Thanks to this particular feature, the amp gets some tube-like saturation and dynamic response that we’re used to hearing with tube amps. In many ways, Blues Cube Stage sound resembles those classic vintage tube-driven Fender amps. It’s perfect for all those who like blues, blues rock, jazz, or old school hard rock.

We could go on for days about how great Boss Katana amps are. While everyone thought that solid-state amp technology is no longer interesting, Boss released this series and surprised all the true guitar lovers. Looking into it, we’d single out Katana 50 as a great example of a wonderful-sounding solid-state amp. And the best part about it – it’s not expensive at all.

On the main control panel, we have very simple controls, including a switch for 5 different amp types. You can get anything from crystal clear cleans and up to heavy chugging metal tones with it. It also comes with delay and reverb effects, as well as modulation effects and an additional simple boost. We also have a USB output, as well as a simple line out with an integrated cabinet simulator. To put it simply – there’s nothing you can’t do with this amp.