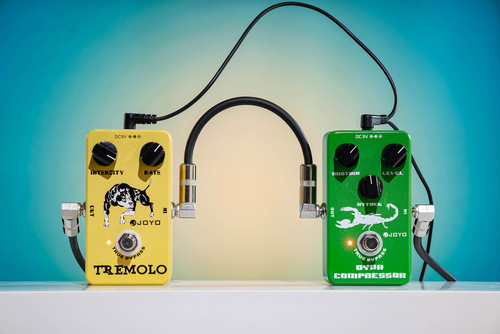 Getting into guitar pedals is one of the most exciting things about playing the electric guitar. These little effects units give you so many different possibilities and are designed to enhance your expressive potentials. The best part is that your setup is completely modular and you can do pretty much anything.

However, aside from all the exciting effects that we’re all used to, there are some pedals that we tend to overlook. While we all enjoy a nice chorus or a flanger that will give us that wacky processed tone, some not as exciting pedals can actually do wonders to our tone. Although not that fun to use, compressor pedals are an essential part of every remotely serious rig today.

Compression, or dynamic compression, sorts out the dynamics of your playing. The loud parts get quiet while the quiet parts get louder. This way, your tone is more “evened out” and more controlled. Although many use it for rhythm sections, where it’s pretty convenient, it can also come in handy to boost some lead sections as well. To put it simply, your tone will not only sound more controlled but also more powerful in certain settings. In addition, compression can also add some sustain to your tone due to the amplification of those quiet parts. This is why some compressors are also labeled as “sustainers.”

With all this said, we thought that we could look more into the matter and bring you the best compressor pedals that you can find today. The choice was not simple, but these below are the pedals that we came up with.

Although not a big company as some that we’re used to, Wampler prefers quality over quantity. When it comes to compressors, you simply cannot go wrong with Wampler’s Ego pedal. The controls on it are pretty detailed for such a compact pedal. There’s even a “blend” knob that lets you mix the original signal and the processed tone. This particular feature opens up the whole new world of tone-shaping possibilities.

Looking more into it, we also have a sustain knob. This way, you can make it useful for your lead sections as well. Wampler Ego is very popular among guitar players of all genres.

And what would this list be without at least one mention of Boss? Over the past decades, they also became known for their compressor pedals, especially the old CS-2. However, they’ve developed this further and brought us an improved version, the CS-3 Compressor Sustainer. And just like the old version of this pedal, CS-3 manages to make your tone really “thicker,” especially if you’re using single-coil pickups. We can also find a very useful sustain knob that makes a lot of difference if you’re using this pedal as a boost for solo sections. And let’s not forget about the Boss build quality and overall reliability.

For many years now MXR pedals have been finding their way into the pedalboards of even the most experienced guitar players. But the one that interests us here is MXR M76, also dubbed as Studio Compressor. And this is one of the most detailed and useful compact compressor pedals that you can find today. You don’t often find a guitar-based compressor unit that has Ratio, Attack, and Release knobs. In addition, you also have controls for both input and output levels on it. This is all rounded up with an LED-based gain reduction meter on the front panel.

Okay, it’s really difficult to move on with this list if we don’t include at least one more MXR product on it. Up next, we would also mention their M132 Super Comp. But compared to M76, this one is far simpler. We only have three basic controls, one for volume, one for sensitivity (which is basically the threshold), and another one for the effect’s attack level. But despite its simplicity, you can still do a lot with this one and get enough of a punch for both the rhythm and lead sections. In addition, it’s a very reliable one.

But in case you quite like compact pedals, we would advise that you take a closer look at Xotic pedals and their SP Compressor unit. Its main trait is that it’s super small, taking the “mini” format that can fit even the most crowded pedalboards. On this little pedal, we have controls for output volume, the blend between processed and unprocessed signal, as well as an additional switch that determines the intensity of dynamic compression. Despite its small size, this pedal can make your tone rather huge.

Due to the low price, many guitar players might be skeptical about Joyo pedals. However, these offer some of the best tones out there, at least for their price level. A great example comes with their JF-10, which is a very potent compressor pedal with a very simple to use interface. There are only three basic knobs on it – volume, compression attack, and sustain. Surprisingly enough, this pedal is very well made, despite its low price. If you’re on a budget, you can’t go wrong with JF-10.

Lastly, we would also like to mention TC Electronic and its wonderful HyperGravity compressor pedal. As the name suggests, the pedal can make some really heavy tones. But not in the way a high-gain distortion will make your tone heavy, more like the thickness in the low end of the spectrum. The pedal comes with four knobs and one switch. The knobs control the output volume level, attack, sustain, and blend (or mix). The additional switch is pretty useful as it has three voicings and can let you choose between a modern, vintage, as well as a downloadable TonePrint setting. In addition to these, there’s also a switch inside the pedal that lets you choose between a true and buffered bypass.