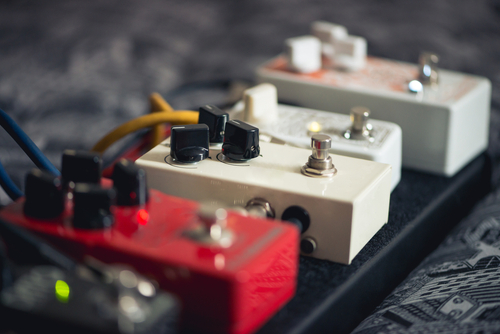 The electric guitar is, by far, one of the most fun instruments to play. In fact, we’re having a really hard time finding anything else that can even compare. This is mostly because it’s so “modular.” By using different pedals, amps, and other devices, you’re able to make so many different tones and express yourself in new ways.

Pedals, in particular, are very appealing to guitar players of all genres and all skill levels. But among all the effects out there, delay – or echo – is one of the most important ones. You can’t hear a guitar today with at least some reverb or delay. Without it, your guitar just sounds so “dry” that it isn’t even pleasurable to listen to.

And this is exactly why delay pedals are so popular. Of course, there are analog and digital delays, and the lovers of smooth and warm vintage-oriented tones love analog delays. But, at the end of the day, it’s up to you to choose what suits your needs. Delay is, in most cases, usually more popular than reverb, so it’s always a good idea to look more into them.

If you’re looking to make your tone sound richer and less “dry,” then we’ve come up with a useful list of the best delay pedals that you can find today. We’ve looked through many different examples and brought something for everyone’s tastes and budgets. Here’s what we came up with…

We’d like to start things with this wonderful delay pedal by TC Electronic, called Flashback 2. Now, this one is designed as a relatively simple yet very versatile delay pedal that opens up a lot of possibilities. Aside from some basic controls, like level, time, and feedback, there are some advanced options on it. Firstly, we have 8 different delay types that you can choose from, including one mode for looping. Then there are three more empty presets that you can use to store downloaded TonePrint templates from the company’s website. Also, there’s a control that lets you use those “uneven” or syncopated delay modes. Pretty exciting for such a small pedal that can also work as a stereo device.

Over the decades, Electro-Harmonix has cemented its place in the world of guitar pedals as one of the most important manufacturers. But aside from their legendary Big Muff Pi and all its versions, there are actually many other great pedals. One example is their Canyon delay. Comparable to Flashback 2 that we mentioned above, it’s a small and simple pedal that still offers a lot of versatility. It comes with 10 different delay modes on it. But what’s quite exciting is the “tap” or “divide” button that lets you dial in unusual rhythmic patterns for the repeated tones. You don’t often fund such a feature on delay pedals.

What’s more, it also comes with the looper mode which gives you about 60 seconds of recording time. It’s not much, but it can come in handy for some experimental purposes. Overall, you cannot go wrong with this one.

Some might be weirded out by Joyo pedals, especially seeing how ridiculously cheap they can get. But the best thing about them is that they actually outperform even some more respected brands out there. When it comes to delays, Joyo’s JF-33 is a pretty interesting example of a cheap and simple pedal. It’s a mono device with only the basic controls, so no additional bells and whistles here – just a good old delay pedal to enhance your tone without ruining you financially. Set the desired volume level of repeats, the feedback, and time, and you’re ready to rock!

While MXR is known as a great brand of guitar pedals, there’s just something about their M169 Carbon Copy delay that makes it so interesting. It’s a classic analog device that many vintage-loving guitar players will adore. The repeated tones are slightly muffled, giving the whole effect a completely different vibe compared to modern digital delays. It comes with up to 600 milliseconds of delay time, which is usually the maximum for analog delays. There’s also a button for modulation that adds some of that analog saturation to the tone. You won’t find a pedal like this anywhere.

Of course, a list of any guitar pedals simply cannot go without the mention of Boss. In fact, Boss is the first company that offered a digital delay in the form of a compact pedal back in the early 1980s. And tracing the direct line from the simple DD-2, we now have DD-8 as the company’s leading compact delay. It follows the exact same design, but it has some very interesting additional features to it. For instance, we have 11 delay modes, including one looping mode with about 40 seconds of recording time. There’s even a simulation of those old tape-based delays and even a trippy psychedelic “reverse” mode. If you’re having a hard time choosing your perfect delay pedal, just go with Boss and you can’t ever go wrong.

Okay, we’re sorry for including yet another Boss device. But you need to understand that they make really good delay pedals. If you’re looking for an ultimate echo machine and don’t care about any price limits, then go with DD-500. It just doesn’t get better than this. It’s a complex digital device made especially for extremely versatile delay-filled tones. It’s a continuation of their other more complex digital devices that focus on just one effect.

It’s too difficult to explain what it does in just one or two paragraphs. DD-500 comes with 12 delay modes and is fully customizable. Also, it’s very user-friendly with its display that shows what’s actually going on. Whatever is the genre that you play, this pedal will help you create some of the craziest echo presets you can imagine.