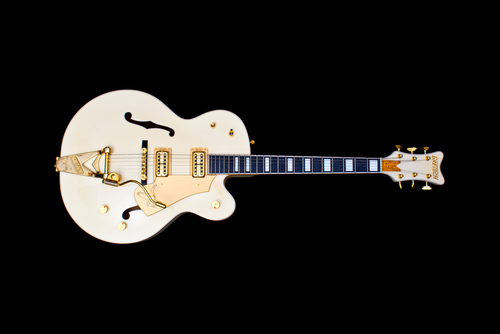 Most major guitar manufacturers have models that uniquely identify their brand. For example, Fender has the Stratocaster, and Gibson has the Les Paul. Gretsch has their signature models as well, particularly in regards to their hollow bodies. With guitars like the G5422TG Electromatic, they have produced yet another offering that highlights how good a hollow body can be.

Featuring a relatively thin body depth of only 2-¼” inches, the G5422TG uses a high quality maple laminate for the entire body construction, with both the back and the top having an arched design. Aged white binding and two classic f-holes add touches of elegance as well.

The set-in neck is constructed from solid maple, and it features a rosewood fretboard with more aged white binding and 22 medium jumbo frets. The fret marker inlays add a striking look and are a bit of departure from most other guitars, as they are ¼” circles that are located under the low E string instead of right in the middle (called Neo-Classic thumbnail inlays). A big plus is the Graph Tech NuBone nut, a synthetic material that is a more than suitable replacement for one made from real bone.

Gretsch FilterTron humbucking pickups power the amplified sound from the G5422TG, and the guitar has a fairly unique controls system. Each pickup has its own volume knob, along with an overall master volume and master tone control. The master volume has an integrated treble bleed circuit, giving you a pronounced and defined sound without getting mushy or undefined at lower levels or tone knob settings.

Hardware on the G5422TG is both functional and attractive at the same time. The Adjustomatic bridge has a rosewood base for excellent vibration transfer while offering a full range of height and intonation adjustments. The Bigsby B60G Vibrato Tailpiece has a vintage vibe for days on end, and the open gear tuning machines allow for super fine tuning adjustments.

The gold finish theme on all of the hardware adds yet another level of sophistication…heck, even the pickguard is gold! It may sound like a bit much, but it is very tastefully applied and gives an overall classy appearance to the entire guitar.

In the sound department, the FilterTron pickups just rock it up…or jazz it up…or twang it up…pretty much whatever tone you want to get! Here’s a bit of a warning though – it may tend to produce some feedback at high-level-crank-it-up-and-rock-it-out volume levels, but the same could be said about most hollow body guitars..

Overall, coupled with the controls setup, the G5422TG is a very versatile instrument that would be right at home with just about any style you can throw at it. Playability is the name of the game as well, with superb, fast string action and the added comfort from the Gretsch Standard ‘U’ neck profile.

Guitars such as the Gretsch G5422TG Electromatic are proof positive that hollow body models aren’t just for traditional jazz playing. It is a wonderfully flexible instrument that plays great, has a look that will definitely turn heads, and also has a wide range of tones that can put a smile on even the most discerning guitar player’s face.